Each month there is one exclusive fetish feature movie released that runs about 3-4 hours long, give or take 30 mins. You can stream the full movie or there are scene clips available that run 20 to 40 minutes each. Video content stretches from 2007 to present. All videos are streaming in 1080p HD on Roku, PC, and mobile devices. There are also some photo galleries but nothing to write home about.

Behind The Scenes With Severe Sex Films

One thing I really enjoy is the behind the scenes footage. There is quite a bit of BTS video content, including performer interviews, inside the Severe Sex Films Roku Channel. You’ll even find a few interviews with Dee Severe herself! She’s the mastermind behind Severe Sex Films and has been since its inception. Her insights, as well as her performers, really gives you a vivid picture of what goes into making creative fetish content like that found within Severe Sex Films.

Save 60% On Yearly Subscriptions
All subscriptions include unlimited streaming in 1080p HD on Roku, PC, Xbox, Playstation, and mobile. Test drive Severe Sex Films for $3.99 or save big when you subscribe for one year.

Add To Your Roku Dashboard 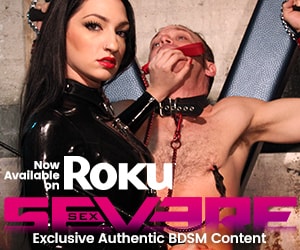